The History of Big Green Egg
Throughout Civilization 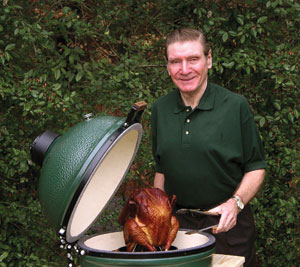 In the beginning, there was wood, dry leaves, lightning and eventually, fire. Early man soon learned about the flavor benefits of cooking meat over this exciting discovery, which quickly gained acclaim as far superior to gnawing on raw Tyrannosaurus ribs!

Later cultures discovered that the results were even better when the fire and food were contained inside a dome-shaped, earthen vessel. Evidence of these early prototypes of the Big Green Egg have been found by archeologists in the ruins of nearly every civilization around the world…except the Propanians, who preferred to scorch their meals using volcanic gasses, and the DriveThruians, who ate all their meals from take-out and quickly vanished from planet earth.

Today’s Big Green Egg is a modern-day evolution of these ancient cookers. Centuries ago, these knee-high cookers were fueled by wood or natural charcoal (just as the Big Green Egg is today), and pots were hung inside them for cooking rice. Eventually a slatted cooking grid was fitted inside for grilling and roasting meats. Popularity spread as U.S. service members discovered this type of cooker during World War II and shipped them home after the war. The domed cookers were an exciting alternative to the metal charcoal or gas grills of the day, and people became enamored with the added flavor and juiciness this “newly discovered” style of cooking gave to foods.

American serviceman and entrepreneur Ed Fisher was one of those who discovered the domed clay cooker. He was amazed at how much better the food tasted, and he began to import them, sensing that there might be an interest back home. When Ed opened the first Big Green Egg store in Atlanta in 1974, he sold a simple clay cooker based on the same design and materials that had been used thousands of years ago.

Despite the great results they produced, these original cookers were fragile and not durable after exposure to the elements. Ed Fisher was fully committed to developing a company to produce and market these amazing cookers, and set out to make the best one that had ever been created. As the EGG gained popularity, the company aligned with a state-of-the-art factory to incorporate new types of ceramics based on materials initially developed by NASA for the space program, and worked tirelessly to find ways to improve the design. The result was a far superior cooker that is stronger, more durable and provides better heat insulation than anything else on the market, a distinction the Big Green Egg is known for today.

Big Green Egg is now the world’s largest producer and international distributor of the highest-quality ceramic cooking system. When you purchase an EGG, you know your investment is protected by a successful, experienced company with a worldwide reputation for best-in-class products and unmatched customer service – providing you with the confidence that comes from knowing that this company has been standing behind their amazing products for over three decades!

From the original Big Green Egg, the company has grown to include seven sizes of the EGG available throughout the world in over fifty countries, with hundreds of accessories designed to make cooking anything on a Big Green Egg fun, entertaining and delicious!

Often copied, but never equaled – the Big Green Egg is the Ultimate Cooking Experience! If it doesn’t say Big Green Egg, it isn’t.